If you’re looking for a cute pet that you can enjoy owning, you may want to consider a guinea pig. Of course, many people are not familiar with guinea pigs so you may be wondering, “What is a guinea pig?” You may be thinking that a guinea pig is a small pig that can be kept as a pig, but these animals are not in any way related to pigs at all, despite their common name.

They are actually a type of rodent that is part of the Caviidae family. Their body is compact and they don’t have a tail. Usually they weigh about 1.5-2.5 pounds and can be up to 10 inches long. They are a bit larger than mice, but are still a fairly small pet that can easily be kept indoors. Here is a picture of a Guinea Pig mother and her babies… 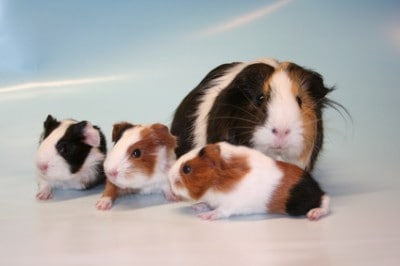 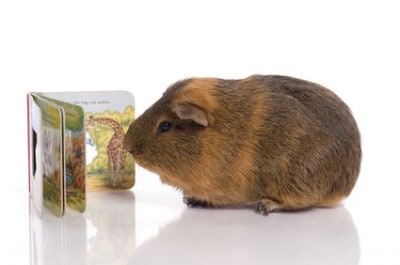 Certain tribes in ancient Peru are even thought to have worshipped these animals in the past. At some point, guinea pigs were brought to Europe by English, Dutch, and Spanish traders and they became a popular exotic pet among royalty and the upper class of Europe. In recent years, they have become a popular pet in North America, since they are affordable, small, and easy to keep.

Many people wonder, what is a guinea pig, because of the unique name these animals have been given. They are not pigs at all, which is a bit confusing. The species is known as Cavia porcellus, and the word “porcellus” is actually a Latin word that means “little pig.” This is where the name has seemed to come from. In some cases, breeders have been known to refer to these animals as “cavy.” While guinea pigs are built a bit like pigs, with a stout neck, no tail, round rumps, and heads that are quite large compared to their body, it is still not clear how they became known as “pigs.” It is also difficult to explain where the “guinea” part of the name came from, since they are not from Guinea, although some think they may have been brought to the Europeans through Guinea.

Why They Make Great Pets

As you learn more about what is a guinea pig, you’ll quickly begin to see why they are so popular as pets today. Here are just a few of the main reasons they make such great pets.

–  Easy Care – One of the top reasons that guinea pigs are such great pets is because they are so easy to care for. They don’t require a lot of care. They simply need food, water, and basic housing. You don’t have to worry about taking them out on walks, they behave well, and they are not known for being destructive.

–  Fairly Small – Another reason they are popular as pets is because they are fairly small. While they are larger than mice or hamsters, they are not so large that they require large living areas. They are large enough to fare well with younger children. Even if you don’t have a large home, you are sure to have enough room for a guinea pig.

–  Docile Temperament – Their docile temperament also makes guinea pigs a great pet. They are rarely aggressive and are not known to scratch or bite. This makes them a great pet for families, although adults should be around when children are handling them.

–  Economical Pets – Last, you’ll find that guinea pigs are economical pets as well. They usually are quite healthy, which means they don’t need vet visits very often. They don’t require expensive food or expensive housing either. For people who want the enjoyment of a pet without spending a lot of money, the guinea pig is definitely a great option.

What is a guinea pig? These animals are cute rodents that make wonderful pets. If you’re looking for a cuddly pet that you can enjoy, why not take the time to learn more about these animals and how to bring one into your home as a family pet. For information on how to give your guinea pig the proper care is needs, join the discussions on our Guinea Pig Care Forums.