If you’re like most people, you assume guinea pigs are no different from hamsters, rabbits, or any other small furry creature. 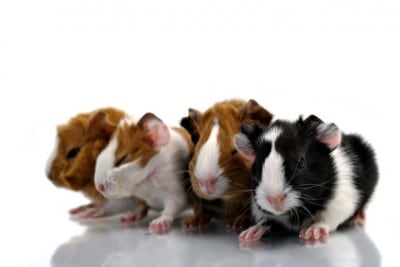 In truth, you need all the guinea pig information you can lay your hands on, because this endearing creature has as much individuality as a larger pet!

Guinea pigs go back as far as 5000 B.C., hailing from South America!  South American tribesmen gradually introduced them to English settlers in North America, and from there they were taken to Europe.

Because their scientific name is Cavia porcellus, many people call them Cavies.

If you just acquired one, you’re about to become a Cavy Slave.

You’ll find a wide variety of guinea pig breeds.  Many of the breeds have a sleek-furred variation.  The most common is the American or English variation, with a smooth, short coat that lies flat against the body.  Abyssinians have distinctive swirls, called rosettes, in their fur, which is dense and coarse.  The Peruvian guinea pig boasts long, smooth fur-it parts along the spine and grows to a couple inches in length.  The same is true of the Texel guinea, except that its hair is quite curly.

Others include the Silkie or Sheltie, which also has long hair, but its hair is silky and it grows back from the head.  The Crested guinea pig has a thatch of white fur above his eyes.  The Teddy has short, kinky hair.  The Coronet combines long, smooth hair with a rosette perched atop his head.

The Baldwin guinea pig has no hair whatsoever!  The same general guinea pig information applies to all of them, except that the long-haired breed must be groomed more faithfully.

Some people actually show guinea pigs.  But that involves breeding, which is never a good idea-it’s risky for the females-and these friendly little creatures will be happier living simply in a brightly lit spot in your home.  Never put him in an area where he won’t see people passing through on a regular basis.  He will learn his name, and he’ll watch for you with interest when you enter his area.

Introducing him to your home takes a day or two.  He’ll be shy at first, so let him explore the area.  Keep cats and dogs away from him; they are natural predators, and no matter how nice your dog is, your guinea pig will be frightened of him.  And if you have other guinea pigs, delay introducing them until you know the new one isn’t bringing any germs into the home. Rabbits in their cages can be placed proximal to guinea pigs, but don’t put the two of them together.

Guinea pigs clean themselves, and they actually emit a white substance from their eyes that they spread throughout their fur.  It’s a good idea to help them with a good combing once a day, using a comb that has both wide and tiny teeth.  You can bathe him in about an inch of warm water-not hot!-using pet shampoo designed for rabbits, guinea pigs, or even kittens. Never use human shampoos of any kind!

For proper care of your guinea pig, information tells us that nail trims are needed monthly.

If they grow too long they’ll curl under, cutting into his pads and possibly causing infection.  Buy him his own set of human nail clippers for this purpose.  Many people suggest shining a flashlight up from beneath his nails so that you can see the vein that runs through the nail-the quick. If you cut it, he’ll bleed.

Weigh him weekly-a male will weigh between 2-3 pounds (Around 1.2 kgs), and a female a little less.  General guinea pig information for good health includes a clean, dry nose and eyes that are bright and clear. You will see the milky discharge mentioned previously that they use to clean their fur.

Droppings are normally brown and oval; don’t be surprised if you see some greenish droppings from specific pellets or veggies they’ve eaten.

If you see a runny nose, crusty eyes, fur shedding more than normal, tears in his foot pads, droppings that are clumped or small and tear-drop shaped, take him to the vet.  If you ever notice that he’s huddled away from you in the corner of his cage, seek care immediately.

You’ll need an exotic vet for this endearing little soul, so locate one in your neighborhood as soon as you bring your new pal home.

Have a question, need more info or want to contribute your experience with guinea pigs? – Get involved on our Guinea Pig Care Facebook Page