It’s vital to learn all you can about sexing guinea pigs before you own them, because breeding them is not always easy or advisable. 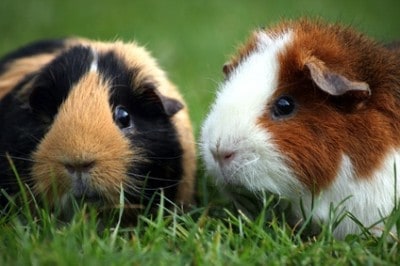 Some people have a successful go of it once, but when they try it a second time the female dies.

As you learn more about sexing guinea pigs and then breeding them, you’ll learn interesting facts – such as, it’s unwise to breed roan-colored guinea pigs because the resulting offspring are often deformed.

The females are called sows, and the males are known as boars.

Babies-which become sexually mature in a matter of weeks-are known as pups.

Many pet store employees simply do not know how to tell the difference between the boars and the sows, and they might very easily send you home with one of each.

So even if the clerk tells you he’s given you two macho men who will remain buddies for life, it’s a good idea to take them to your vet and have them sexed.

Or, look at these instructions for sexing guinea pigs and see if you can make an absolute determination on your own.

The boars are somewhat larger than the females, and the females have larger nipples.  But those are relative comparisons:  You’ve got to examine the underside of the cavy, between its two back legs, to find the genital area.

Both of them have Y-shapes to their genitals.

But the male’s genitals are likely to look more like an i; the opening looks like the vertical shaft of an i, and it’s dotted by a tiny bump with the tiniest speck in the middle of it.

The female’s genitals are more likely to resemble the traditional Y-shape.

Try pressing gently on the belly just above the genital opening.  If it’s a male, you should be able to feel the shaft lying beneath the skin.  It’s also likely that when you press downward-again, do this very gently-the penis will pop out a little.  If the cavy is heavy or if it’s older, you might have difficulty getting the penis to extrude, so give it a couple tries.

Females generally have smooth genitals with a slightly swollen feel to them.  You will, however, notice a bumpy feeling to the area.  Try to gently pull the skin to the side; if it’s a female, you should be able to separate the skin folds enough to show a Y-shaped opening.

When they are pups, the boars are likely to have a small, doughnut-shaped ridge of skin around the rectum.  This is where the testicles are.  As they grow, you are likely to have much less difficulty getting the penis to show itself. Most experts agree that if you really want to become successful at sexing guinea pigs you need to compare a boar and a sow side by side.  Work with the clerk at the pet store until you find one of each-you’ll both learn something!