Before we talk about the stages of your guinea pig’s pregnancy, let’s make certain that your guinea pig is already pregnant. If she is, then you need to know what to watch for. 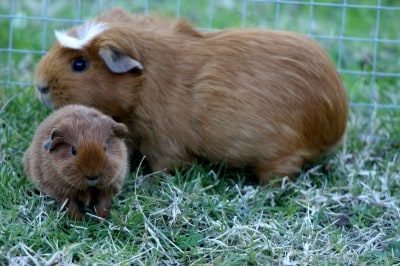 However, if you’re still in the process of deciding whether to breed her, then heed our advice to not breed her.

Think twice before you breed your guinea pig!  If you’re going to breed your sow, be certain she is young enough, because when they are older than around six months their hip bones grow too closely together to permit easy birthing. If you know and accept the risks, then read on to become familiar with the stages of pregnancy.

Before pregnancy, the two lovebirds must mate. The male will put on a manly display for the female, rumbling, standing upright before her, and approaching her with his head lowered. If the female is receptive to his suggestion, she will signal her acceptance with loud squeals. If she isn’t in the mood—er, if she’s not in heat, that is—she might very well bite him or snap at him. If he persists, she’ll dampen his enthusiasm by urinating on him!

Is She or Isn’t She?

How can you tell if the sow has become pregnant? The best clue might be when they stop the mating ritual—nature’s call has been answered, and they both quiet down. You should be watchful of the sow, because you really won’t notice any difference in her appearance for the first few weeks. If you have been breeding her or if you suspect she has mated, then do not lift her without supporting her hindquarters, in order to safeguard the fetuses.

As soon as you suspect she has mated successfully, you should replace her usual Timothy hay with alfalfa. Alfalfa has extra calcium and protein, both of which she very much needs. 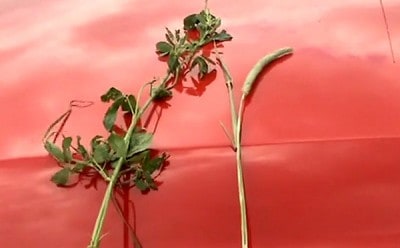 Those nutrients will nourish her as well as the fetuses and also prevent hair loss. She also needs extra vitamin C; you can give at least 10mg orally. Try giving her green peppers, more broccoli and kale.

A guinea pig’s pregnancy lasts about 9 or 10 weeks. While your sow might bear from one to six pups or even more, the average litter size is 3.

Interesting fact – The largest numbers of pups a sow has given birth to was 14!

If your sow is carrying more pups rather than less, her length of pregnancy will more likely be closer to 60 days than 70.

Weigh your sow weekly to be certain she is gaining weight at a regular pace. Avoid over-feeding her, however, because by the time she moves into the latter stages of pregnancy it will be difficult if she’s carrying extra body fat. Don’t restrict her exercise just because she’s pregnant; she needs it to keep her weight down and her strength up. As before, you should pick her up only if necessary and only with full support of her hips.

By the time she reaches the seventh week of pregnancy, the babies will make up about half of her total body weight. You will be able to see the babies’ movement beneath her skin.

Once she passes the seventh week, you will easily be able to see the babies’ movement and even be able to distinguish by gentle touch what body part you are feeling. If you touch her underbelly a couple of centimeters ahead of the anus, you will be able to feel that the pelvic bones have spread apart. Once they are one to two finger-widths apart, it won’t be long until birth.

You should also provide the sow with a stress-free environment. If the male or other guinea pigs seem to get on her nerves, move them into another cage. Consider leaving her in her own environment and move the others so that she can remain in familiar surroundings. Reducing her stress makes her pregnancy and childbirth easier. Sows do not usually build nests, so provide some soft bedding in the cage. Polar fleece is perfect.

Watch your sow for signs of illness during pregnancy. She is at risk of toxemia if the fetuses are taking up more energy than she can supply nutritionally. You should watch her carefully if she is too fat and moving very little. If her body is metabolizing fat, it will generate ketones, which you can measure with strips for her urine. Have the details of a small animal vet handy – Be prepared.

Most guinea pigs give birth in the daytime hours. She will give out a cry just as she goes into labor, and it will take about five minutes to birth a pup. Each pup will have its own amniotic sac, and usually the mother removes it and eats it. If you notice a pup with the sac remaining over its face, break the membrane open with your finger nail. If labor takes much longer than 20 minutes, she may require emergency medical attention. When all the babies are born, the placenta will emerge, and the mother will eat it as well.

The pups will be fully furred and have their eyes open. They will want to eat solid food within a few hours of birth.

The mother remains at risk for some medical complications for a few days after giving birth, so keep a close eye on her. It takes two or three weeks to wean pups, and remember that the baby males must be separated by the time they are at most three weeks old.

For weekly guinea pig care tips and super cute photos, make sure to LIKE our Guinea Pig Care Facebook Page